The Translator’s Training Course (TTC) is a 4-module course that provides training in translation principles, Bible background, study skills and language discovery. Participants attend as a team representing their language/tokples. Each team is assisted by a mentor. Teams of Papua New Guineans work together on Scripture translation. Each team needs to have at least two participants from the language community and a mentor who is able to be there in the course and provide on-going support between courses. Pacific Institute of Languages, Arts & Translation (PILAT) coordinates the course and it is held in Ukarumpa, PNG. TTC is finishing this current session. Pray for the teachers and students as they learn valuable skills. Pray that they can go back to their villages and complete the assigned tasks needed to advance to the next course.

See the new video on why TTC is important to Papua New Guineans. Click on this link “Training the translator”  or enter  http://youtu.be/zRfi4wCfomI in your browser

Getting the job done is almost always easier when there are a lot of willing helpers. These men are helping unload boxes of New Testaments from a helicopter on an island off the coast  of Papua New Guinea.  A plane brought them to that remote airstrip to be loaded on a helicopter. The store/shipping department in Ukarumapa, managed the logistics of getting them from the overseas printer to the airstrip while mechanics maintained the planes and the clinic, autoshop and school cared for the personnel who did all this work. The children’s home took care of the children who needed to attend the school while the parents were away. I could go on but I think you get the picture. It takes many more people than just the translators and language development workers to get a translated New Testament to the people. Pray for the many people involved in this process so that God’s Word could be heard in communities across PNG.

Not all landings are smooth. Not all airstrips are dry but the planes still have to get there. Like many jobs, there are times when getting the work done gets messy. Sometimes the difficulties of the job create unforeseen circumstances and challenges for translators and the workers who support the translation process (like pilots, school teachers, medical personnel, auto mechanics, managers and many more – but that’s another story). Pray for these individuals and teams that strive to bring the Word of God to the many people groups in Papua New Guinea. Pray that the work would be done well, while maintaining healthy relationships.

One day Kossac, James and the rest of the team of the Kamano-Kafe translators were sitting at the table with Rich, their translation advisor, brainstorming. They needed some good readers to help with their audio recording of the recently translated New Testament. It was the goal of the team to provide a clear recording of every translated book to accompany the written version, to help their traditionally oral community understand God’s Word as clearly as possible. So far the recordings had been a resounding success, loaded onto hand-held, solar-powered “Audibibles” which were durable enough for the village setting. But, finding enough fluent readers wasn’t always easy.

“Remember that one man who helped us before on the Acts Video? The one who delivers day old chicks? What about him?”

“Yeah,” Kossac mused, “But he’s really busy. He’s constantly driving across the country to the chicken plant to pick up the chicks and bring them back up here to the mountains to deliver to stores. He’s never going to be available.”

Not too long later, Kossac had just hopped on one of the local public transportation buses, on his way to work on the recording, when he saw a familiar face on the side of the road. “Hey,” Kossac yelled out the window, “Are you busy? Are you driving down to the chicken plant today?”

“Actually, no!” the man yelled back, “It is unexpectedly shut down today and they don’t have any chicks to sell. I’m free!”

“Quick,” Kossac urged, “Get in the bus!” And the two of them went to the Kamano-Kafe recording studio where they spent the day recording. The next day, the plant opened back up again, and the man was able to return to his regular chicken runs.

“God shut the chicken plant down, just so we could finish recording,” laughed Kossac.

I often think about sunsets and sunrises as we have a great view of both. While the rest of the day gives us glimpses of beauty in different ways, like high billowing white clouds or gorgeous blue skies, it is at the beginning and end of the day that we see the spectacular displays of colour. Perhaps its because at the beginning of the day we need reminding of His work before us and the encouragement of a job worth doing. The end of the day brings us the reminder of the satisfaction in the beauty of a job well done. Pray today for the beginning and the end of the day. For the energetic starts and the satisfied finishes that Bible translators and Language developers in Papua New Guinea need in order to feel that the day is going to be,  and was worthwhile. For those who are feeling that this wasn’t one of those days, pray for God’s hand of blessing and encouragement.

While it is not a race, it is important to translation teams all across Papua New Guinea that the work being done in translation projects, keeps on track! Why? Because many language groups still have more work to do. Most translations that are completed still need the Old Testament, study materials and in some cases, revisions. So pray that the translation teams that are working diligently to keep pace would be able to run the whole race with endurance. 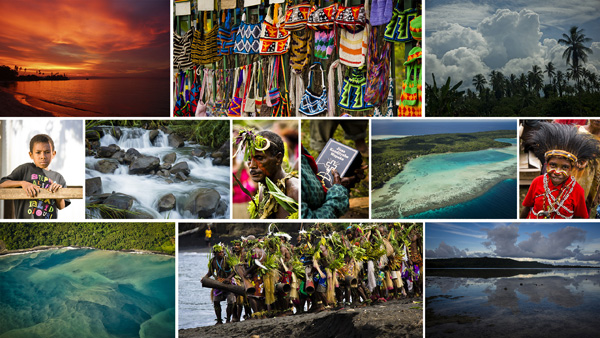 There is no one perfect image that can capture Papua New Guinea. It is a diverse country in so many ways. Breathtaking views of the land, sea and skies, along with the many different cultures and peoples, make this one of the most colourful places on earth. Pray that this beautiful land and people will soon see a language project started in every people group that needs one.

Week after week John went to church to hear about God, but he always left with a heavy heart. The sermon and the reading of the Scriptures were meaningless to him because they were given in a neighboring language which John couldn’t understand. John wanted to hear God speak to him, but God seemed distant and foreign. His heart ached to know the true and living God.

John had seen a change in some of the village men and women. They had been helping the SIL translators form an alphabet for their language, write books, and teach their people to read. He was glad his children were going to read the language of his forefathers, but he wanted to know the joy and peace that some of these others had experienced.

One night John was sitting around the fire with other men from the village. Darius, one of the men who had been working with the SIL translators, came running over to them carrying in his hand the first three chapters of the book of Mark, written for the first time in his language. “These words are sweet to my insides,” Darius said. “Listen to them.”

As Darius read, John heard the living Word of God for the first time in his own language. His eyes became wide and his heart pounded in his chest. God was speaking to him and they were the sweetest words he had ever heard. John asked Darius to read it again and again, and he listened intently to every word.

When the reading was completed, John stood up and told the other men, “I think we should all go to our own homes now and think hard about these words, for if we stay here and keep talking we will forget what we’ve just heard.” They all agreed and quietly slipped away to their houses to think about the sweet, yet powerful, words of God.

As John walked away from the fire, he knew that he had found the source of joy, peace, and hope for which he had been searching.

Everyone likes to win and being on a winning team creates a a special bond. How does one get on a winning team? Watch this video and find out! Pray that more language groups in Papua New Guinea would use the translated Bible so they can be on the winning team.

Click on this link  Winning team or enter this address in your internet browser https://youtu.be/SLLkjscAzpk

Written books like the New Testament Bible are not the only place translated Scriptures end up. Sometimes the text is added to videos such as the Jesus Film so that it can be shown in villages throughout the language group. Representatives from ten different language groups that already have the New Testament translated attended a training course where they learned how to place the translated text into the Jesus Film video. The goal is to have Papua New Guineans creating these videos with translated Scriptures, in 100 languages, in Papua New Guinea over the next ten years. Pray that this goal could be accomplished.