PILAT is an institution dedicated to training Papua New Guineans for Bible translation, literacy and other language development work. The purpose of PILAT is to glorify God by equipping PNG Christians to work in these areas. Located on the campus of the beautiful Ukarumpa Training Centre, it offers courses in several areas related to language and culture, including: translation, linguistics, biblical studies, literacy and adult education.

For more information clink on this link or go to pngtraining.sil.ac.pg

The expression clam up means to “keep quiet” or “stop talking.” One thing we don’t want to do is clam up about the need for heart language Scriptures. Many people throughout the world and almost 300 language groups in Papua New Guinea are waiting to see a translation project started in their own language. Pray for more resources to make this happen. Maybe a language project would begin tomorrow because of your prayers!

“The Audibible goes where we cannot,” explained SIL translation advisor Rich Mattocks, speaking of the hand-held, solar powered audio player. “These are excellent in Papua New Guinea where many areas do not have electricity.”

Rich and the team of translators recently completed the translation of the Kamano-Kafe New Testament. Although the written form is still at the printers, the audio recording is available on the Audibible and is already making an impact.

The team is now forging ahead with the translation of the Old Testament. One day one of the translators, James, received a message that his elderly Aunt Beniftio had died and he asked to be excused from the translation work to visit his extended family during the days of mourning.

Months before her death, his aunt bought an Audibible. Bedridden, Benifitio asked others to take the Audibible outside each day to be charged in the sun, but she warned them not to carry it away from her house. As friends and family stopped by to visit her in the evenings, Benifitio’s Audibible was playing. When her younger brother Marco* came and listened to the Scriptures, he accepted Christ and his life was changed. Many others also heard the Word of God spoken in their heart language on Benifitio’s Audibible.

When James arrived for the days of mourning, the family welcomed him and asked, “What have you been doing?” When he answered, “I’ve been translating the Kamano-Kafe scriptures,” Marco’s face brightened and he said to James, “Thank you for turning God’s talk into our language. The Kamano-Kafe language is very sweet and I understand it. I quit going to church because the message didn’t make sense to me in the trade language or when pastors used English. But when I heard God’s talk being spoken in our own language on the Audibible I understood it and now I believe in Jesus.”

After the time of mourning was completed, James returned to the translation table, more convinced than ever of the need to get God’s Word to people in written and audio form in the language they understand best.

*Not his real name.

Papua New Guinea has over 600 islands, many of them inhabited. To reach all the people with the Scriptures in their own language, it is necessary to travel by water. Recently there have been incidents on the water that have ended well but remind us of the need to pray for safety for those who travel by boat to the many remote areas of Papua New Guinea. Pray for protection as translators and language development workers move around the country using all forms of transportation. 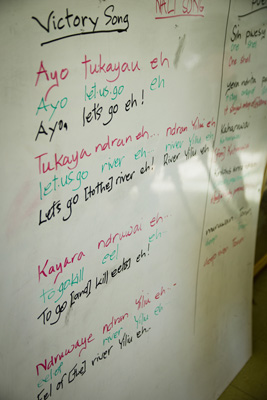 “I will be a part of this Bible translation work until I die.” Gariai has been working on translation and literacy in the Kunimaipa language since the early 1980s. Still, he is eager to keep learning, and this year is participating in a two-week Back Translation workshop held at the Ukarumpa Training Centre.

Sylvester, a translator who has been working in his language of Korafe since 1989, found the workshop to be very interesting. “The back translation workshop is helpful because it helps me understand how my own language works. For example, is the order subject, verb, object or different? If I learn about my own grammar, then I can create a better back translation for the consultant to check.”

“God called me to this ministry…this work, translation, is very important in my life. It’s important in my family’s life.” Sylvester leaned forward, his gray hat tipping to one side. “[It’s my hope] that all men will be able to read God’s Word well…and let it come inside their thinking and affect their lives.”

Gariai agreed. “This work has changed my life…” he said. “Now many people in my community are hearing the Word of God and getting training to preach from our translated Scriptures. Only God could do such a thing.”

Sometimes Bible translation is like fishing. In order to have success in both, it is important that you make correct choices in the decisions you face. Each day is a learning experience  for the translators. Looking for the right word for the right passage is like making sure you have the right bait for the right fish. Use the wrong bait and the fish swims by without interest and no impact. Use the wrong word and the passage loses its meaning with no impact on the community. Pray for a successful fishing trip for the translators today as they work within communities wanting translated, life-changing Scriptures. 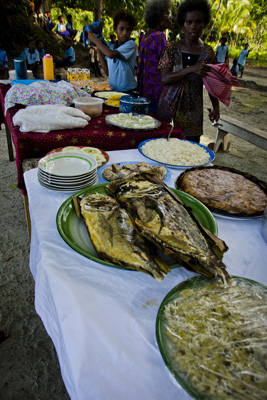 “We are happy and glad that you are here as we desperately want God’s Word in our language!” exclaimed Babalawa Wapi, a Dibiyaso speaker.

The church floor, long boards supported by stilts on each end, bounced like a trampoline as the singsing group danced and leapt and sang for joy. Peter, Bonnie, Katawer, and Eva had just finished their travels around the Mubami-Dausame-speaking villages in Western Province. They were connecting with the village leaders (including Foia Foia, Hoyahoya and Hoia Hoia speakers) and encouraging them to consider how they might be part of translating God’s Word into their own languages.

Further south, Steve, Jeff, Karen, and Carol were concluding their parallel journey around Dibyaso and Doso-speaking villages. The two teams had been sent out in response to the many requests from this area for assistance in Bible translation, exploring the possibilities of a new kind of multilanguage translation project that wouldn’t rely solely on the dwindling numbers of outside linguists.
As the women and children danced and sang in the language of their hearts, their passion and enthusiasm for translation was unmistakable. The community leaders and church congregations demonstrated their commitment to having God’s Word in their own languages through generous gifts earmarked for the training and equipping of their people to translate the Bible.

Pastor Bani Gomada was extremely grateful that the teams had come. “I want to thank the team. Thank you for hearing my cry and God’s call. We are sending a big thank you with you, to your families, your churches, your coworkers—a heavy one, not a light one.” His eyes twinkled, “You have to load that on your balus [plane]. If it is too heavy, you might have to leave it!”

The next steps for the Bamu Tributaries Multilanguage Project include Scripture engagement and beginning translation workshops. Pray with us for God to raise up the right people to staff these workshops!

Only one way in. Many villages in Papua New Guinea have only one way in – by air. When the planes circle over these strips, much of the community shows up in excitement. These airstrips are vital to the language development and Bible translation effort. Every year some strips have to be closed because of unsafe conditions. Ruts caused by water runoff, high grass, poor drainage, even ants can close a strip down until it is inspected and proclaimed safe again. The work falls on the community to keep the strip usable. Pray for the pilots that fly and for the communities that maintain these strips so that the work of Bible translation can continue.

Papua New Guineans are investing in the Bible translation and language development movement. Universities are actively training linguists, churches are partnering with translation organisations and communities are allocating resources to make this work happen. Pray that the momentum towards translating, learning  and using tokples (heart language) Scriptures will accelerate the number of projects within the country.

A new fun video that shows God’s amazing creative power – “Under the Sea.” This was taken during some downtime after the Arop-Lokep New Testament was dedicated. It was almost like the sea exploded with color to welcome another language to God’s word.

Click here to watch it now – Under the Sea video.