Sometimes we travel many miles to celebrate Christmas.  When you are young, it seems like it takes forever to get there! I wonder how many miles were traveled in order to see the first Christmas? The Shepherds from the fields, the Wisemen from the Far East and of course, Mary and Joseph, probably traveled the most “uncomfortable” miles. I wonder if they thought they would ever get there? The Christmas story still “travels.” For some, they are hearing it for the first time in their heart language. How exciting that must be. Hearing it in their heart language makes the story come alive. Pray for the traveling Christmas story in PNG.

“All who heard the shepherds’ story expressed astonishment, but Mary quietly treasured these things in her heart and often thought about them.” – Luke 2:18-19 – People respond in different ways to the “Word.” Some are indifferent, some are astonished, some respond with quiet introspection. But the “Word” connects with people and ultimately everyone responds in one way or another. But the “Word” translated into the heart language of the listener, has a greater chance of impacting lives and transforming communities. Pray for a language group today that doesn’t have the “Word” translated into their language. Go to http://www.pngscriptures.org and pick a language to pray for today.

In the Christmas story, when the shepherds heard the angels speaking and singing, they heard it in their heart language. When the Wise men from the East were warned not to reveal where the child was born, they heard it in their heart language, a different language then the shepherds.  Did you ever think about this? The Christmas story is a translated story. The Christian narrative is a translated narrative. That may not be something we think about very often because for many of us, in our lifetime, these important truths have always been in our heart language. But this has not always been the case and is not the case for many of the language groups in Papua New Guinea.

As we think about the Christmas story, one thing that we do not often think about is that someone translated that story into a language we could understand.

There have been many amazing stories about language development activities and Bible translation events this year.  In 2013, ninety-three releases were sent highlighting the work being done in Papua New Guinea. There have been eighteen videos posted on YouTube. There have been over 160 blog entries posted on The PNG Experience blog site and Facebook site. These stories have been seen, read or viewed more than 20,000 times.

Each story depicts individuals, villages, or organisations, focusing on the translation, use, and impact of Scripture in the vernacular, and recognizing the need to preserve the mother-tongue languages. The PNG Experience would like to thank each and every one of you for being a part of this effort in Papua New Guinea. This work could not be done without support from people like you.

Have a Merry Christmas and see you next year 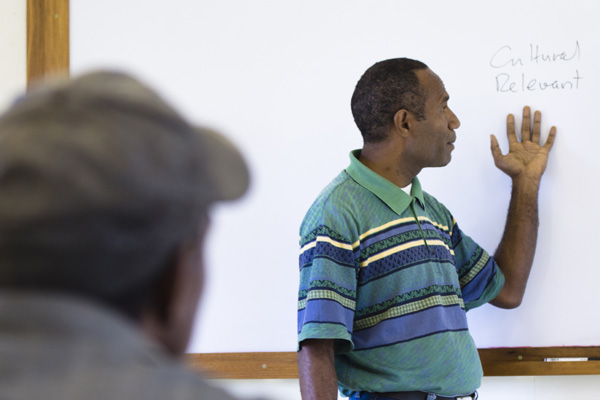 Recently with the backing of international aid organisations, the Ukarumpa Training Centre offered a course in Creative Phonics to university professors. This kind of multi-organisation, multi-institutional partnership is essential to the language development and Bible translation effort in Papua New Guinea. Pray for more of these partnerships.

Our white Christmas is made possible with flowers. For all of you, US east-coasters, who are getting a lot more of the white stuff than you normally get this time of year… remember, it isn’t officially winter yet. Officially, winter begins on December 21 at 5:11 pm. So enjoy the rest of Autumn! In the Highlands of Papua New Guinea, it is a wonderful spring like day (like most days). No snowy white Christmas forecast for here. But Christmas comes all the same. Pray that more Papua New Guineans would have the Christmas story in their heart-language by this time next year.

At the very top of the Linguistics Library in Ukarumpa, PNG, a decorative pattern accents the end wall. This pattern is a reminder of its designer, Veda Rigden.

Veda was in her mid-fifties when she first went to PNG in 1969 to volunteer her art skills for six months. She had taken early retirement from teaching high school art in Auckland, NZ. She extended her stay and volunteered to not only design the building’s decorative pattern, but also to climb up the scaffolding to complete the original painting.

While working as an illustrator, Veda saw the need for translators and felt called to help. Most people would say that it is way too late for a person in their mid-50’s to think about getting linguistics training and starting a translation programme. Nevertheless, she went to Australia, around age 56, attended the SIL school of linguistics, and returned to PNG equipped to engage in the work.

Partnering with Dorothy Price, Veda worked with the Karkar-Yuri translation project for the better part of the next two decades. This isolated people group in Sandaun Province has about 2000 speakers. Veda continued to work well into her seventies, until she retired (again) in 1990. However, she continued to be involved in the translation program from her home country of New Zealand until the New Testament in the Karkar-Yuri language was published in 1994.

Veda’s original six month stint turned into 21 years. Veda once wrote that after her first retirement, she could have stayed at home, eating cucumber sandwiches and having cups of tea with the vicar, but given that she was still able, she would rather be out somewhere serving God. Now when people look up and see mosaic patterns painted at the top of the Linguistics Center, it reminds them of Veda, and her example that no one is ever too old to obey what God is telling them to do.

Veda has had her last retirement. Recently, she went to be with her Lord, at age 97, and is now residing in the presence of the One she served faithfully all her life.

Usually we say, “Look up, there is an airplane.” That is almost always because that is our normal perspective. Sometimes in order to find solutions, we have to “change our perspective” from the normal way we look at things, to an alternative way. This is what is being done in many areas of the language development and Bible translation effort in Papua New Guinea. For example, the aviation fleet recently converted its fixed-wing aircraft fleet from four different airplane types to one. Training, maintenance expertise and parts inventory are now much more manageable, helping to keep costs down and flying efficiency up.  Pray for more innovative solutions to the multifaceted  issues that language workers confront in PNG.