Every language group deserves to hear the Word of God in their own language. The language development and Bible translation effort is working hard to accomplish this goal but there are still about 280 language groups on the outside looking in. Pray that the financial resources and trained personnel would be found that will bring all languages groups heart-language scriptures.

What if all the fish of the sea looked the same? What a boring world we would have! But that is not the world our creative God has made. He loves to bless us with His creativity. He also blessed us with many cultures and languages that are unique. With over 830 languages in Papua New Guinea, PNG is certainly blessed! With this blessing comes a challenge. Many of these languages still do not have even a single scripture portion translated into them. Pray that God’s word would be made real in each and every unique language.

It is good to have detailed plans for projects. In order to prioritize needs and allocate resources, we need to plan accordingly. But sometimes the best laid plans don’t fit into the realities of the language development and Bible translation effort. Sometimes you just need to go with the flow. Papua New Guinea is called the “Land of the unexpected…” and the unexpected can often happen. When that happens, flexibility and adaptability are high values. Pray for good planning but also for wisdom to know what is the best course of action when the plans need changed.

Yesterday we mentioned the painting in the Ukarumpa Meetinghouse and the impact the painting had on Norbert, a computer instructor at the Ukarumpa Training Centre. Worthy is the Lamb, painted by Chris DeJong is a mighty testament to all peoples on earth, and strongly encourages each one of us to revisit our spiritual values. Its message serves as a hopeful and searing reminder that God has an incredible future planned. To learn more about this painting go to The Promise Story website.

Chris has another painting entitled “Promise Story.” This is located in the dining hall at the  Ukarumpa Training Centre and has been a blessing to many students and staff. The Promise Story also has teaching tools that are available at the same site.

Norbert had never seen a painting like this one. It was his first visit to the Ukarumpa Meeting House and above the stage a giant painting stretched over the room. Painted by Chris DeJong in 2001, it was filled with angels and clouds and animals and people from around the world all focused on the very centre, where a Lamb stood before a scroll. It’s Revelation, he realized.

As he gazed at the Scripture, tears filled his eyes. His friends, Elden and Bea Sandy, who were sitting next to him, bent closer, “Why are you crying?” they asked. “What happened?”
Norbert shifted on the bench, then turned. “Before I came here, I had a vision in my early childhood about what God wanted me to do with my life, but I’d never seen it depicted before—until today. Now I can see it.”

Since 2010, Norbert has supported Bible translation by teaching computer skills to national translators, from basic typing to using specialized translation programs like Paratext. “We create a dialogue in the classroom,” Norbert explained, “So [students] can discuss not only problems they are having with their computers, but other things too.”

“Teaching is a call for me—ever since I was a little child I’ve wanted to follow the example of Jesus Christ as a teacher.” Norbert first studied computer science in seminary and later went back to school to study education to improve his teaching skills. “I’m always studying!” he laughed.

Although the classes are small, interest is high, and Norbert is optimistic about its continued growth. “I teach them how to use antivirus and protect their work. It’s very valuable for translating in the village—otherwise they can lose all their translation work if they get viruses.”

“I used to teach at other schools and universities,” Norbert explained, “It was the life I thought I wanted, but it wasn’t satisfying. But now, [by helping translators], this is where my excitement and my joy have been found: serving the Lord through computer science.”

The PNG Experience blog is now one year old. Over the past year we have posted 286 blogs which have been viewed almost 22,000 times! THANK YOU for supporting the language development and Bible translation effort in Papua New Guinea by reading this blog and praying for the effort here. We value your participation with us. So… celebrate today the things that are happening in PNG by praising God for His great work!

Why not share this blog with others so that more people can hear what God is doing in Papua New Guinea.

Water transportation is a vital part of the translation effort in Papua New Guinea. Many places are only accessible by boat. Boat travel is inconsistent and at times dangerous. Pray for safe travels as language development workers and Bible translators move from place to place.

What is the best way to communicate God’s message to people in a way that fits their culture and communicates most clearly to them? For some people, the written word may be enough. But for people whose cultures have traditionally relied heavily on oral communication, something more may be needed.

One of SIL’s guiding principles is that everyone should have access to God’s word in the language that speaks to them most clearly. When Clyde Smith tried to communicate this concept in the Samo language, the local adaptation of the phrase became, “The Bible is for Everyone.

A big step toward making the Scriptures accessible to everyone happened in March when church leaders from three languages met together. They grappled with the question, “What else can we do to help people know God’s word besides reading the Bible aloud from the pulpit?”

They adopted a method where the pastor first told the Bible passage as a narrative. Since the people of this area have always shared information by telling stories, this approach fit naturally into their traditional oral culture. It communicated more clearly to the people than having the same story read from a book.

After telling the story, the pastor led a discussion following the traditional way of processing information. When people were encouraged to share their ideas in the style of a village meeting, they were eager to participate. No one was asked direct questions, but all were given the opportunity to speak and share their thoughts about the story.

As teams of pastors representing several language communities went around the villages sharing stories in this way, there was a change almost overnight in the way the communities viewed the church. Before this, the villagers thought that church was only for good people. Now the young and old, men and women came out of their houses to join in the village discussion. Suddenly it didn’t matter to them if they were good or not. They had discovered what the Smiths knew all along: The Bible is for everyone!

“At times the participants were so involved in writing their stories, they didn’t want to stop to eat lunch!”

This testimony from language worker Julie MacKay communicates the enthusiasm and commitment of Teop speakers at the Writers Workshop held in the Tinputz District of North Bougainville.

The group began the workshop by making some critical decisions about their writing system. After they came to an agreement on how to write silent vowels and where to place word breaks, they developed a spelling guide that would not only help them be consistent in writing their stories, but would also serve as a guide for local translators.

Once this foundation was established, the team launched into writing. Their goal was to write stories and publish books in order to expand the limited supply of reading material available to emergent Teop readers. They adapted some stories that had been written by others and created stories of their own. By the end of the week, 24 book titles were drafted, typed, edited and formatted.

The books covered a range of topics. Some were fiction stories for young readers, such as “I’m Bigger” and “Lizard and Wild Dog.” Another genre, stories from the New Testament, included titles such as “The Greedy Rich Fool” and “Jairus and His Daughter.” Others, including “Drying Mangos” and “Avoiding AIDS,” were instructional in nature.

Not only were they preparing reading materials for others, but the participants themselves became better readers through the workshop. Several mornings they all read aloud in unison a chapter of Mark in Teop. At first, the reading was a bit awkward because “their mouths were heavy” and sometimes they would break out laughing at their reading mistakes. But they improved as they practiced reading aloud in a group, and several of them used their free time to read independently.

Two elementary teachers and several writers from the workshop returned after the sessions officially ended to outline phonics primer lessons and type up more stories. Julie and other facilitators are hopeful that this is just the beginning of the creation of a miniature library of books in the Teop language. 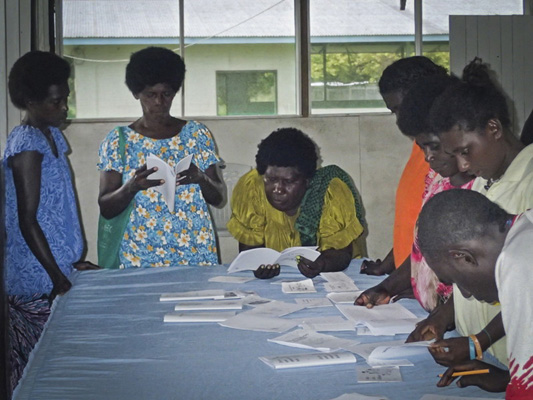 The educational system of Papua New Guinea is challenged because of the over 800 languages that school teachers confront as they teach. Most Papua New Guineans end up being multilingual. Research has shown that children who learn to read and write in the language they learned first, learn a second language quicker and easier and tend to do better in the upper grades of school.  Pray for more opportunities for children to learn how to read in their heart languages.