In 2012, three Kwomtari speakers attended the ﬁrst Oral Bible Storytelling (OBS) workshops and learned to tell Bible stories in their mother tongue. Their dramatic presentation of these stories created interest among all ages and into neighbouring language areas. Pastors began asking when they, too, could learn how to engage their people using this storytelling method.

In response, Murray and Carol Honsberger planned to run a series of four OBS workshops. A team of Godly national men would teach translation principles, give Bible background, and provide Scripture in the form of Bible stories to participants from the Kwomtari and three neighbouring people groups, the Baibai, Nai, and Yale. The ﬁrst workshop was scheduled to start in late May, 2017.

Carl Campbell was a translator to one of these groups, the Yale, and also a close friend and colleague of Murray and Carol’s. While making the two-day walk to their village to join them for the course, Carl suddenly became very ill.  He died in a Yale village along the way. Murray and Carol recalled, “People hiked to our village to tell us of Carl’s death. They arrived two days before the course was to begin. It was decided that it would be most appropriate to postpone the OBS workshop.”

The workshop was then rescheduled for the end of August, 2017. This time everything went as planned. People who attended were excited about what they learned. A Baibai man who participated said, “I have been chosen to do church work but do not know how to preach. OBS is teaching me how to share God’s Word,” Another man from the Yale language group said, “In this ﬁrst course, I learned about what is involved in giving something to God, and about being a true friend to my wife.”

The second OBS course was then scheduled for early February, 2018. In late January, the Honsbergers arrived in the village to find that their village brother Alex was very ill. “Although he made it to the hospital, he passed away two days later. It was hard to believe this was happening all over again,” said the Honsbergers. “Following Alex’s death, his immediate family made the difficult decision that the workshop should go ahead as planned. They were united in deciding that Satan should not be victorious. This decision went against all cultural norms.” 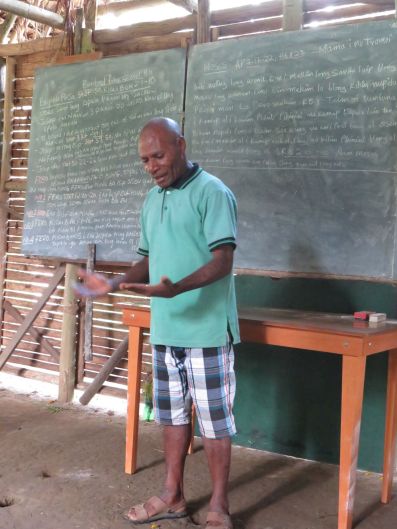 Easter weekend, following the course, Joseph (translation chairmen and brother to Alex), along with other OBS participants, shared the stories they had just learned at the workshop. Joseph, giving his own life as an example, went on to share that the ‘work’ of following Jesus is not easy. Joseph shared with them how he felt the Spirit of God had been at work in all that had happened. Eleven young people responded to the challenge, choose to confess Christ as Lord, and were baptized. Joseph’s heart was full of praise and thanksgiving.

In reflecting on these events, the Honsbergers concluded, “We are conscious of the fact that there is a spiritual battle going on. We believe God desires to do great things through the OBS workshops and it is a privilege to be part of it all.”

We started out drafting together as a team, working only part-time when I (Adam) was with the team in Enga. However, as the translators developed their translation skills, the team of six began working together full-time, even when I was not present with them. And the last few books the team drafted individually, sitting together at the translation table, but working to draft the books independently. 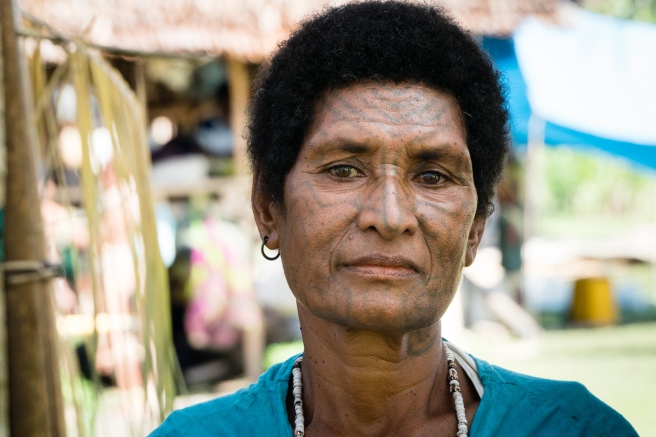 Story and Photo by Susan Frey

Sylvester would leave home for weeks at a time, traveling to another village hours away to work with the other Baruga translators.  When he returned home at the end of each work session empty-handed, he would see his wife’s frown.  Ann Rose was not pleased that her husband spent so much time working on translation without any material gain to show for it.  She was not a Christian, and did not understand why her husband could not spend his time working for money.  Because of her constant criticism, Sylvester found that he was not able to work on the translation in his own home.

This continued for more than two decades, until a group of Baruga traveled to Ukarumpa in late February 2017 to do an audio recording of the Baruga New Testament.  This time Sylvester brought Ann Rose with him because he wanted her to witness firsthand the work that he had been so dedicated to for so many years.

While at Ukarumpa, Ann Rose began to feel an intense pain in her stomach.  She was rushed to the Ukarumpa clinic, where Dr. Carl Luther diagnosed her with inflammation of the gall bladder.  He recommended that they go immediately to the hospital in the capital city of Port Moresby for emergency surgery.  Sylvester and Ann Rose did not have the money to travel to the city, nor did they know anyone there who could help them out, and so they returned to their village in a remote part of Oro Province instead.

Months of sleepless nights followed as Sylvester dutifully cared for his wife – feeding her, carrying her to the toilet, and tending to her every need.  “She was in so much pain.  All my hope was gone, and I thought she would die,” Sylvester recounted with obvious pain at the memory.  “But on the night of October 5th, she received God’s healing.  Early in the morning, she woke up and said ‘I’m hungry.’”  Sylvester found some sago in the house, boiled it, and brought it to her to eat.  Much to his surprise, Ann Rose greeted him this time with a warm smile.  His astonishment only grew when she said, “We will thank the Lord before I eat.”

From that day forward, Ann Rose has been healthy and pain-free.  The change is not only in her body, but also in her heart.  Instead of criticizing her husband’s work, she has come to believe in it as passionately as he, and they now work together as a team to promote the translation work among the Baruga people.

Story and photo by Stephanie Ernandes

Mavis has served in many different roles supporting Bible translation throughout the years.  She started serving in 1996, and she has recently started a new position as a coordinator and teacher for a course which focuses on helping Papua New Guinean adults who unfortunately missed out on education in their earlier years.  This Tok Pisin Literacy course is designed to help those who cannot read or write learn to read and write in Tok Pisin, the local trade language.

(Mavis on the left, teaching literacy)

“By teaching people to read in Tok Pisin, we are trying to put a bridge down so that everyone can learn to read in their own heart language.  I feel that at the end of the day, this is the right thing to do,” shared Mavis. “There are so many stories told by these people who have graduated from the Tok PIsin Literacy course.  After we teach them and they understand the concepts of reading and writing in Tok Pisin, often they are able to progress to reading in English and most importantly their own mother tongue language.  When they read the Bible in their own language, everything becomes so real, the Bible becomes part of them, it’s no longer second hand information.  This opens up the whole world to them! They come back and tell us about it and when we see them in town they hug us saying, ‘There is my teacher!’  I feel in my heart that I helped changed their world for them.”

Another course is available for Papua New Guinean teachers who are already involved in teaching Tok Pisin Literacy. A teacher who attends this class for seven days, graduates with a certificate and goes home with more advanced teaching methods to better teach literacy to those needing it.  Mavis has recently attended this course and is excited to go back to her own village to help people who would like to learn to read.  She plans to do this after she retires from her current position in three years.

During the first Tok Pisin Literacy course Mavis helped with, she noticed some students reading the Bible in their own language.   “I asked them, ‘Is this your first time? They answered, ‘First time. First time!’ They were crying and excited!  This was an amazing thing that happened in my life. For the first time they read the Bible in their own language!”