“These men aren’t telling us the truth!” Lazarus scowled when Gary shared that he and others would soon be teaching anyone who wanted to learn techniques of telling Bible stories in a dynamic and accurate way.

Although Lazarus was more interested in stirring up trouble and taking drugs than he was in story-telling, his curiosity compelled him to find out more. When the team arrived in his village to teach, Lazarus hung around to listen. As he sat on the wooden benches and heard the Bible stories, he was drawn to their message.

Instead of the dry boring teaching he expected, he discovered interesting visuals and live dramas which often involved the course participants. The stories were told with inflection, enthusiasm, and sincerity, all of which captivated Lazarus.

By the time the workshop concluded, Lazarus was a new man. He testified, “Now God has completely changed my thinking.” Others also noticed the changes in Lazarus. At the beginning of the training, he rarely spoke during discussion times. But after the stories impacted his heart, he happily joined in the class discussions and dramas and contributed his thoughts during the morning devotions.

He also became a very talented story-teller. Because of this, he was one of the people the teachers asked to become a trainer, to which he eagerly agreed. Lazarus is happy to pass on his new story-telling skills, and his new life in Christ, to others.

On September 25, 2009, the first Kodiak aircraft to serve in Papua New Guinea touched down in Aiyura Valley. On August 17, 2018, this Kodiak became the first of its kind in the world to complete 5,000 hours of flying. Below is the story of one very special flight made during its first year in PNG.

Seven thousand speakers of the Yopno language live in the rugged Finisterre Mountains in a remote corner of Morobe province in Papua New Guinea. For fifteen years the Yopno people worked to build a runway, primarily to bring the Word of God into their community. The name Yopno means “we put down,” describing a people who chose to put down weapons, fighting, and anger, replacing them with the Word. They call the runway “Gen Tamo,” which means “Place of the Word.”

Though most of the Yopno people live at around seven thousand feet elevation, nearby mountain peaks jut up to over twelve thousand. In these steep mountains without roads, people rely on aircraft for their connection to the outside world. When small planes land on this airstrip, they bring food, garden tools, and other supplies. They also carry out the sick and injured when they need medical help beyond what is available in the village. Sometimes they carry cash crops to be sold in other areas.

The Kodiak aircraft is ideally suited for this work. Its climb performance allows it to quickly and safely navigate over the rugged mountains. The Kodiak’s advanced glass panel avionics allow the pilot to “see” the nearby terrain even when clouds obscure the mountain peaks. Large tires and high ground clearance ease the landing on rough and unpaved airstrips.

As pilot Dave Barton approached the Gen Tamo airstrip in August 2010, he could see hundreds of people lining each side of the runway. When he stopped the plane at the top of the slope, a group of men in traditional dress began singing and dancing. He was warmly welcomed with a pig tusk necklace, smiling faces, and strong handshakes.

Next began the joyful task of unloading the cases of translated Scriptures. The people formed a chain, unloading the boxes and then carrying them up the mountainside to the grandstand for the dedication ceremony, the climax of which would be opening the boxes and revealing the much-anticipated New Testament to the Yopno people.

The Kodiak is not just a plane; it’s an aircraft designed and built for landing on rough, hand-built runways, with a short distance for take-off and landing. It’s a special servant, sent to deliver God’s life-changing Word to the people of Papua New Guinea.

“What’s really been on my heart during this season of our project is what’s happening in the hearts and minds of our translators.  We have about 20 national translators from 10 different languages in the Aitape West Translation program.  Most of them have been with us from the beginning of the project in 2001.  They all work together translating the same passages.  The process of doing translation work is very much like a Bible and Discipleship school for them,” said Ben Pehrson, a Bible Bible translation consultant/trainer from the United States.

“Every morning for devotions we basically do an inductive Bible study on a short passage from the book that we are translating that month.  We open that up for anybody and everybody to make observations about the text.  We try to pull out the meaning of the text, by asking ourselves the following questions:  What’s the main point of the text?  Do we have any questions?  Is something confusing?  Is something surprising? Are there cross references that we can think of? Or other passages of scripture that relate?  What kind of application is there?”

“Years ago, it was almost like pulling teeth to get anyone to contribute.  There would often be one or two guys responding, but sometimes you had to sit there in silence for what seemed like forever.  In some ways that is just kind of a Melanesian culture thing: be happy with the silence, everyone is thinking about it, in ten minutes somebody will say something.  Also, part of it may have been they weren’t always necessarily getting it, they weren’t necessarily understanding the scriptures.”

“However, a few years ago we started noticing that they were all starting to really getting it, starting to understand the truth of God’s Word.  And not only getting it but applying the truth to their lives in real key, critical ways.  Things like deciding not to do seek revenge, which in their culture was like a no brainer. We have to seek revenge because they harmed our Uncle, now we have to get them back.  We had translators making decisions to say, ‘No, in this passage of scripture we are translating this month God is showing us a better way and I am going to lead my family not to pursue revenge.”

“Nowadays when we meet for devotions in the morning, pretty much every single guy wants to contribute and we don’t usually have to wait very long either before people saying things.  They are realizing how important, how life giving God’s Word is.”

“…so shall My word be that goes out from My mouth;  it shall not return to Me empty,
but it shall accomplish that which I purpose, and shall succeed in the thing for which I sent it.” Isaiah 55:11

The national translators and local church leaders are now pursuing a strategy to run parallel literacy and language development workshops with the translators so that more people can participate together in these morning devotions. Their desire is for more people to experience the life changing truth of God’s Word so they can return to their communities in greater numbers to spread the impact that God’s Word is making in their lives.

In February 2018, three of our Nukna co-translators (Muransi, Emson and Tángiliong) came to Ukarumpa to help Matt revise the first drafts of Galatians and Ephesians. God certainly blessed our time together, and guided us through the many passages that were a challenge to translate accurately and clearly into the Nukna language. In his epistles, Paul often speaks of God’s grace, the free gift of his unmerited favor. There is no word for ‘grace’ in the Nukna language, and after much discussion we decided to use a phrase that means “God gave his insides to us.” The ‘insides’ are the seat of emotion in Nukna, like the heart in the English language. To give your insides to someone is to feel love toward them, to want what is best for them, and to do good things for them.

Ephesians 6:24 (translated from Nukna): “May God give his insides to people who never stop loving our Lord Jesus Christ.”

Story and photo by Adam Boyd 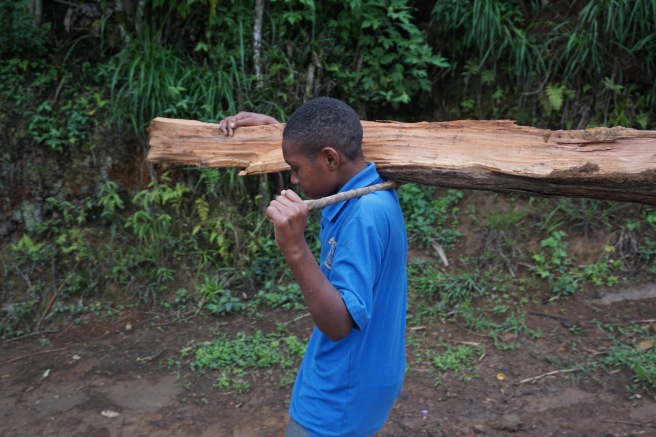 “Take my yoke upon you…and you will find rest for your souls. For my yoke is easy and my burden is light.” Jesus’s words in Matthew 11:29-30 are some of the most difficult to translate into the Enga language. From the time that I became a Christian, I was taught that a yoke is a wooden crosspiece that is fastened over the neck of two animals and attached to a plough or cart that they are to pull. This is an easy enough concept to understand for people who come from societies that make use of beasts of burden, but in Papua New Guinea, there are no beasts of burden. Consequently the concept of a yoke placed on animals is completely foreign. Thus, we have struggled greatly in our attempt to translate Matthew 11:29-30.

Recently, however, I came to learn that a yoke can also refer to a wooden frame that a person places on his neck or shoulders to make it easier to carry a heavy load. Indeed, the Bible often makes figurative use of the word ‘yoke’ as it refers to people and not to beasts of burden (see 1 Kings 12:4-14). As I was pondering that idea, I began to notice that when Engan men carry heavy logs on one shoulder, they often balance the load by supporting it with a small stick placed across the other shoulder. A few weeks ago, it clicked in my mind that the small stick they use to make it easier to carry a heavy log is like a yoke.

Excited by this realization, I quickly asked my friend Benjamin if the stick that men use to make it easier to carry a heavy log has a name in Enga. Sure enough it does. It is called a pyakende. With great anticipation, I asked the translation team if we could use the word pyakende to translate the word ‘yoke’. After wrestling with the phrasing for a little while, we came up with the following translation: “In order to remove the heaviness from your shoulders, take my pyakende. When you have taken it, you will receive rest. As my pyakende helps you, what I give you to carry is not heavy and you will carry it without struggling.”