Story and photo by Janeen Michie

Traditional cooking methods include placing food directly over hot coals, in pots over open fires, or in a ‘mumu pit’, which is a hole dug in the ground and lined with heated rocks. Most families in a village have large metal cooking pots. It takes skill to keep the fire going long enough and hot enough to cook. Most Papua New Guineans eat two meals a day; a small breakfast and a large supper. The coastal diet consists mainly of fish, seafood, birds, sago, sweet potato, taro, taro leaf, cassava, cassava leaf, green leafy vegetables, coconuts and fruits.

When we spend time in the coastal Kala villages friends often gift us with bananas and coconuts. We appreciate these sweet tasting fruits. We heard, in another part of the Huon Gulf region, some youth were listening to Bible translator, Itama, preach in their Kapin language. Afterwards the youth said, “Using Kapin in our church services is sweet, like good food!”

In the gospel of Matthew 4:4a NIV, Jesus says, “Man shall not live on bread alone, but on every word that comes from the mouth of God.”

The Urat New Testament was dedicated June 30, 2016. Now a trilingual Urat dictionary has been published! This is a real milestone and a major boost to the language. The title is Urat – Melanesian Pidgin – English dictionary. Urat is a Torricelli (Papuan) language, spoken by some 7,000 people in the East Sepik Province. Hilkka Arminen, who is from Finland, has been working closely with David Belyeme and Enoch Mundum (BTA) for many years. The dictionary is over 300 pages, has plenty of examples, both linguistic and grammatical, offering various insights into the culture. Some interesting words include krikakarau ‘foggy and drizzly weather, advancing rain coming towards the speaker’, and tukwatup ‘leaves with rough surface used for washing saucepans’. The books are now in the hands of the Urat people in East Sepik, while Beth Bryson (USA) helps the team to produce an online version in Webonary. 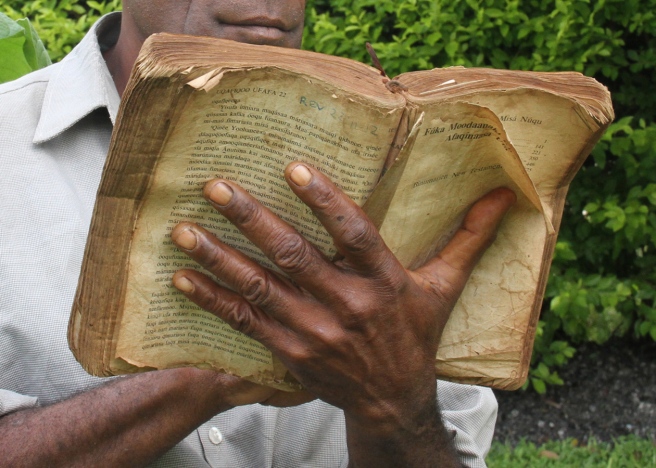 The Binumarien people have been actively using their vernacular New Testament dedicated in 1984 and the vernacular compilation of Genesis, Exodus and Psalms published in 2003.

The current translation team is working to complete the whole Bible. Namondi Unare leads the team of five Binumarien men in the current Old Testament translation effort. Mitchell Michie has been assisting and training the team. The team has drafted much of the Old Testament, but it is expected to take several years before their Old Testament work is completed.

A couple of years ago, some Binumariens requested to buy a New Testament. Their thirty-two year old New Testaments were worn out due to much use and the harsh tropical environment.   One man showed us his New Testament that had lost its cover. The pages were smoked up from wood fires that they make in their houses for cooking and kezeping warm. Concerns were also raised that the young people did not have a vernacular Bible. Unfortunately, no more Bibles were available.

Binumarien translation team slowed down their Old Testament translation work in order to focus on getting the Scriptures that had already been published back into print. Their revised Bible includes the New Testament, Genesis, Exodus, Psalms, Proverbs, and Esther. They made some minor revisions to the original text and removed tone markers. The new publication also includes new maps, illustrations, and a topical index for Bible study.

The New Testament revision with five Old Testament books was dedicated June 16, 2018. Besides making Scripture available, which leads to spiritual transformation, the publication of this volume will strengthen the language group’s use of their mother tongue and help to preserve their rich cultural identity.

Story by Stephanie Ernandes, Photos by Jim and Joan Farr

After 22 years of work, Joan Farr and the Bible translation organization she works with made one of the hardest choices one dedicated to the work of literacy and Bible translation can make.  The continuing disinterest of the Kombio people in the use of their own language, literacy, and the in the translation of the Bible into their language caused question as to whether to continue the project.  In addition, there was very little spiritual hunger.  For those reasons among others the hard decision was made in 2010 to close down the translation project with the Kombio people. 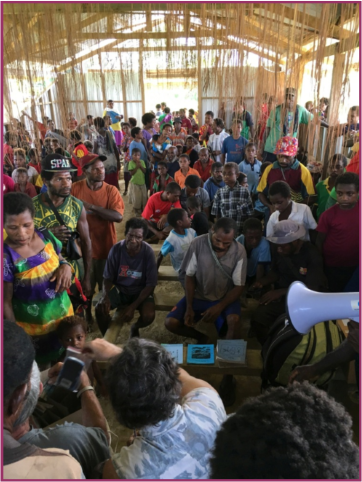 “But God IS at work always whether we see it or not.  He is always good, all the time. He is always in control, of both the apparently good and the seemingly bad,” wrote Joan just after the decision had been made.  Disappointed and discouraged Joan and her new husband Jim left any further work in the hands of the few Kombios who were interested and spiritually strong.

Since 2010 Jonathan, a Kombio lay pastor deeply commited to the use of his own language in worship, has continued with a few others to take courses and to find new ways to share the good news with his people.

Towards the end of this year, following the completion of the Baruga New Testament on the opposite side of the country, which both Jim and Joan have worked on, the Farrs will be leaving to go back to their home country.  Last year they decided, last minute to have Joan and Jonathan record some scripture as well as some teachings with a call to salvation in the Kombio language as a way to finish well with the Kombio people.  Recently Jim and Joan took a helicopter ride out to the remote area with 100 Audiobible players and 100 micro-SD cards for phones.

“I was sure that was total overkill and that we’d have plenty of curious lookers-on but probably only sell 50 total or so,” Joan shared, “However our first stop had unimaginable crowds eagerly waving large bills, which I most certainly did not expect—we sold probably 40-50 audio items PLUS many books just at that one place.  Jonathan, amazed, told me ‘A wall has fallen down.’“

Jim and Joan made four more stops before leaving and completely sold out of the supplies they brought.  Before their trip was completed, they received 84 paid orders for additional items.  Three weeks later, the report came that people were still carrying their devices everywhere and listening all the time!

After her arrival back home, Joan concluded, “God clearly is not finished out there in the Kombio area.  Perhaps He’s just getting started!  But my part is completed, and I’m truly at peace with that.”