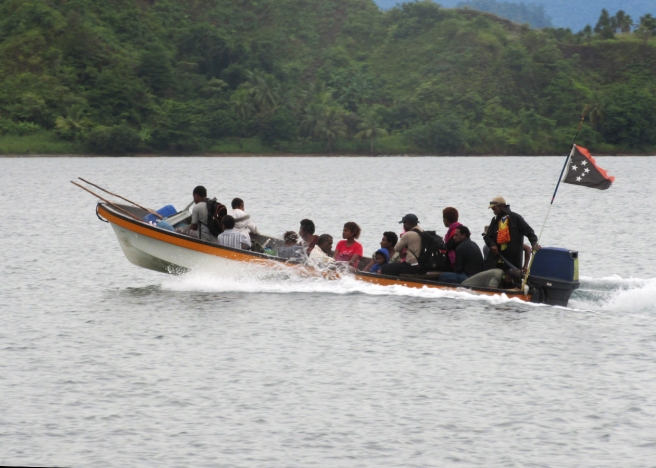 At first the sea seemed calm and peaceful but, as they continued on the waves grew larger and larger. One large wave crashed into the boat and threw Mitchell into the bottom of the boat. Mitchell Michie, a translation adviser for the Kala language group, was travelling by public motor boat filled with other passengers and cargo out to a Kala village. He prayed that the boat would not capsize. If the boat did capsize he would lose his computer, hand written language notes, and valuable time for helping the Kala people translate portions of the Gospel of Mark. When they finally arrived safely to the village, his national companion told him that he believed the Lord had protected them from disaster. Later, they heard that three boats that were following behind them on their way to other villages did capsize. Thankfully no lives were lost.

Story and photo by Stephanie Ernandes

Apa is my grass guy.  By mowing the extensive amount of grass in my yard Apa enables me to have more time to do what I am here to do – support the work of Bible Translation.  On the other hand, the pay I give Apa for his work helps provide for the needs of his family.  I support Bible Translation by writing, Apa supports it by mowing lawns.  In so many ways it’s a win, win situation!

On a hot day in early December, I sat down to chat with Apa over glasses of cold water right after he mowed my lawn.  He shared his Christmas plans with me and asked for prayer.

In his village, as well as in many places across Papua New Guinea, it is traditional to hold a one to two week long Christmas gathering.  People come together every day for two weeks to hear teachings about the Lord Jesus.  Often many different speakers come to teach.

Apa, being an elder in his church, was asked to speak. He wanted me to pray over his preaching.  It was his desire that God would speak through him as he shared a powerful message on Jesus’s second coming.  Apa wanted to share that now is the time to choose to follow Jesus.  Jesus could return at any time!  He also wanted the people to know that they can’t just trust any man that comes along telling that Jesus has come and he’ll show them where Jesus is.  Apa wanted them to understand that everyone in the world will be able to see Jesus coming in the clouds. There will be a bright light like lightning and a great trumpet will sound to awaken the righteous dead to be gathered by angels from every nation!

Before we prayed together Apa told me that he and I are in this together.  The missionaries come and translate the Bible and teach the Papua New Guineans all about the good news of Jesus.  Then when a Papua New Guinean comes to know the Lord, he/she can take this good news out to all the many regions of the country and share it so that all may know.  He became a Christian in 1997 and has been doing exactly that for many years.  Now as he is much older so he has passed on that ministry to his children.

After he returned, I asked Apa how his talk went.  He happily shared with me his excitement about those that came to know the Lord at the Christmas gathering as well as those who in hearing the truth once again had turned back to Jesus.

I smiled, knowing I had a part in that through my prayers and through the small amount I pay Apa to mow my grass. More than that, everyone in my home country who prays for me and who gives sacrificially for my family to serve in Papua New Guinea is a part of what God did through Apa. Together, God can use us to bring his message to even the most remote village in this great land.

The human body has many parts, but the many parts make up one whole body. So it is with the body of Christ. 1 Corinthians 12:12

“Bible Translator Ernie Richert came to our village with his family and met my grandfather in 1957.” Steven was told that, “My grandfather was a great hunter, he was the son of a chief.  He and his family didn’t live in the village, they lived in what we call a house-pig, a place where they took care of all the pigs.  The leaders of the village said, ‘Get that hunter to help that white man.’ And that is how my grandfather got involved in the work of Bible Translation.”

Steven’s father joined the team in 1965. Steven himself decided to join YWAM and planned to go to Bangladesh.  “Honestly I didn’t want to do Bible Translation, I wanted to do something like evangelism when I grew up.  I was raising my support to do this.” In the village, however, we had a prayer meeting every Saturday morning to pray for someone to help Steven’s Dad to translate the Old Testament into their language.  “My Dad didn’t go to English school.  He just learned his English around the translation table.”

In 1996, they had been praying for almost a year. “In November of that year, right at the end of one of the prayer meetings a young man read a scripture, Isaiah 6:8: And the Lord said, ‘Whom shall I send?’ Then Isaiah said, ‘Lord, here I am!  Send me.’  He read that scripture and shared, ‘We’ve been praying for a year, and it seems that no one is responding.  I feel that God is asking this group, that someone in this group will respond like Isaiah responded.’  And I (Steven) was closing my eyes, but I felt like God was saying, ‘Steve, will you respond as Isaiah responded?’ and I said, ‘Lord, here I am, send me.’”

For 15 years, Steven was in the village serving in the church and helping his Dad with translation work.  In 2006 he got involved with training to help other Papua New Guineans to learn the work of translation.  In 2009 Steven joined a Bible translation organization located in the Eastern Highlands area of Papua New Guinea.  He moved his family there and began work managing the organizations mission’s center.  Since 2010 he has become a regional director in the same organization overseeing 12 different language projects in the Morobe region.

What a legacy they leave because of three generations of men who said in their hearts, “Lord, here I am, send me.”