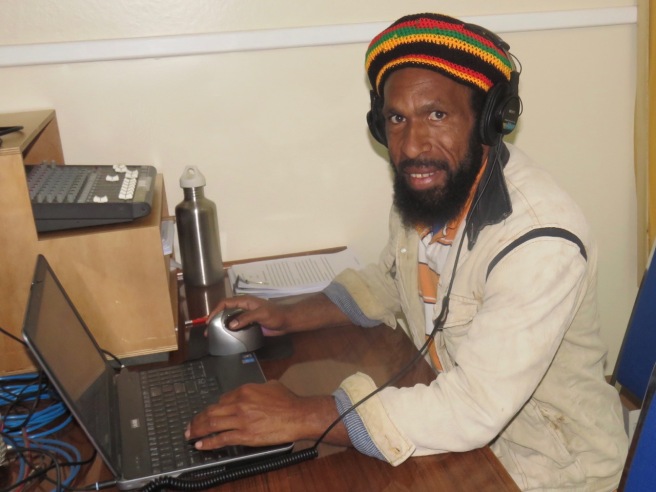 Story and photos by Karen Weaver

The Tobiana family has been involved with Bible translation for the past half a century.

In the late 1970’s Tobiana Ao’ye began working with Ed and Loretta Loving to translate the Awa New Testament of the Eastern Highlands. Together they complete the first draft. When he became employed in Construction and Maintenance in Ukarumpa, his wife Nino took on the role of helping the Lovings revise the New Testament and it was dedicated in 1997.

Their sons, Ken and Emos, watched their parents’ work with interest. When they became young men, they, too, became a part of getting God’s Word to Papua New Guineans in their heart language. Emos explains, “My work will have an impact on people’s lives not only here but in eternity. It is fulfilling to see lives changed because of Bible translation.”

Ken serves SIL through working at the member store, where he now is the assistant manager. He also participated in church engagement teams, speaking about the importance of Bible translation and encouraging the PNG churches to catch the vision of using Scriptures in the heart language. Ken’s wife, Grace, serves as the secretary at the primary campus of Ukarumpa International School.

Emos used his skills in audio production to record the entire Awa New Testament. After the Awa Audibible was completed in 2010, he helped with distribution, encouraging his people to listen to God’s Word. He also recorded Scripture and dubbed Bible videos in several other languages. Today he works as part of a newly formed team recording the AIDS Awareness DVD in the many minority languages in PNG. He is also helping to develop Scripture apps for cell phones and tablets. After hours, he drives the clinic van. His wife Stephanie serves as the secretary in the director’s office.

Between them, Ken and Emos have three young children. Perhaps one day they, too, will play a part in getting God’s Word into the hands and hearts of the people of Papua New Guinea.